SUNDAY 19 DECEMBER: SUNDAY SCHOOL NATIVITY PLAY
The congregation of St Ninian’s, plus visitors, were treated to an excellent and entertaining re-telling of the Christmas Story by the children of the Sunday School, in their own inimitable style – under the capable direction of Rosie, Roz and Ann, assisted by Beth, and with musical contributions by Katie and Peter – thank you one and all! The Sunday School was eventually able to send off 37 shoe boxes for less fortunate children under Operation Christmas Child, and thanked the congregation for their generosity in dontating to the cause.

ON THE SAME DAY, THE DIOCESAN MINISTRY DEVELOPMENT OFFICER, REVD DR ANNE TOMLINSON, made a return visit to St Ninian’s, a year after her first visit, to preach the sermon and to give us ‘marks out of ten’ for what we had achieved from our target list. The afternoon began with a choice of delicious soups, crusty bread and delicious desserts for those members of the congregation able to be there, and then, after a short act of worship, Anne began her review of the year. Anne was pleased – and the congregation somewhat surprised! – at how much had been achieved from the target list. Anne was going to write her report and send it to us with a list of trigger points for further consideration in the coming months. The afternoon ended with a further short act of worship.

The Church was beautifully decorated with flowers and produce for the Harvest Festival, and the children of the Sunday School gave a presentation on a project they will be supporting this year: Operation Christmas Child, an intiative of Samaritan’s Purse – a Christian relief and development organisation which works through local churches to proclaim and demonstrate the love of God to children and families in need across Africa, Eastern Europe and Central Asia.

We were shown a short video of the difference that can be made to the lives of impoverished children around the world and the joy it can bring when they receive a shoebox filled with gifts and goodies. The children of the Sunday School will be collecting toys, felt pens, notepads, toothbrushes, sweets (but not chocolate!) and other items. Leaflets were distributed to those at the service but please check with one of the Sunday School leaders if you are not sure what is appropriate. Donations of shoeboxes and wrapping paper will also be very welcome. The children are hoping to send at least twenty shoeboxes from St Ninian’s – the deadline for despatching them is mid-November.

TUESDAY 28 SEPTEMBER AT 7.00pm in the Church: Bishop Gregor came to teach on the Nicene Creed. About forty people attended from as far away as Gretna in the east and Stranraer in the west, approximately half of these being from St Ninian’s.

DATE FOR YOUR DIARY:

SUNDAY 17 OCTOBER: Revd Dr Anne Tomlinson, Ministry Development Officer, is making a return visit to St Ninian’s. She will preach during the 11.00am Service and, following a light congregational lunch, will lead a workshop to review our progress in the year or so since she was here, finishing by 4.00pm. On the same day, a presentation will be made to Mrs Hilda Wallach, our recently retired organist.

SUNDAY 8 AUGUST 2010 – MARKING THE DEPARTURE OF TWO MEMBERS OF THE CONGREGATION: the Rector presented Geoff Allen with a photo-montage of St Ninian’s as a memento to him and Jeannie of their time here, wishing them both well in the future.

Andrew Stewart (son of our Reader, Alan Stewart) would like to thank sincerely all those who generously sponsored him for the 300-mile London to Paris Cycle Ride which took place between 21st and 24th July. The individual total raised for Christian Aid is expected to be over £1,200, of which £180 came from supporters at St Ninian’s. He says that the sponsorship money was a great encouragement up the hills – 10,200 feet in all! The ride, together with 80 other cyclists should raise in excess of £200,000 for Christian Aid. Well done, Andrew!

SUNDAY 18 JULY: David Steward continued to celebrate his 80th birthday by providing wine for the congregation after the 11.00am Family Eucharist.

John Dewhurst undertook and completed a 100-mile cycle ride in north Cumbria to raise funds for Abbas Rest. (See article in Summer 2010 of St Ninian’s Review.) He will have raised just over £700 when all the money has been collected in …

On Friday 14th May, it was ‘open house’ at Leslie Scarborough’s home and many of his friends visited him to say goodbye, as he was about to move to Essex to live nearer to his family. The Rector presented Leslie with a photo montage as a memento of St Ninian’s, thanking him for all his work as archivist for the church, and saying how much he would be missed.

4th APRIL 2010: EASTER SUNDAY
The Church was full for the 11.00am service, with many visitors in the congregation. The service began with the blessing of the Easter Garden:

The church was beautifully decorated by the Sanctuary Guild with spring flowers and greenery. 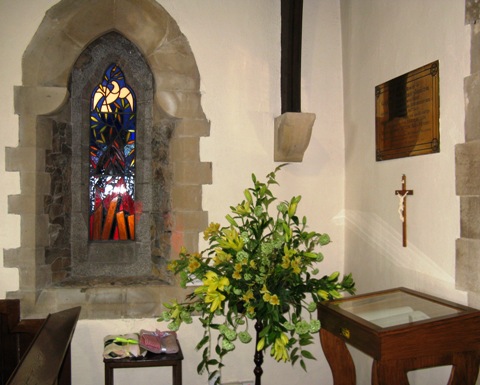 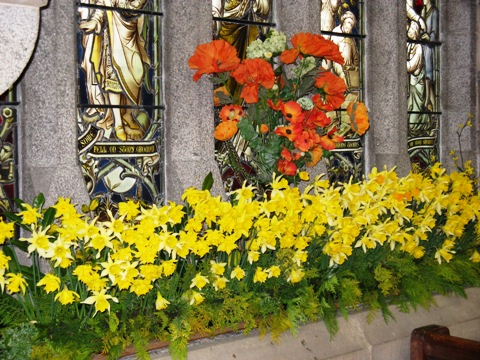 The Easter Offering this year will be used to help fund our CMS Mission Partner, Revd Jane Shaw, working in Pakistan.

The Bishop’s Lent Appeal this year was raising funds for the St Matthew’s Centre, Possilpark, Glasgow, which helps to bring hope and support to the disadvantaged in that area.

This year’s Lent Studies were based on material put together jointly by the BBC and Churches Together in Britain and Ireland (CTBI) and focused on some of the people around Jesus as Calvary approaches. The first study was on Tuesday 23rd February at 2.00pm, repeated at 7.30pm in the Gordon Memorial Hall and was about Jesus himself. Subsequent meetings were on Tuesdays: 2nd March (Mary Magdalene), 9th March (Judas Iscariot), 16th March (Mary, the mother of Jesus) and 23rd March (Peter) at 7.30pm, repeated on Wednesday afternoons at 2.00pm.

The meetings were well-attended and the work of the Rector in collating and presenting the information, using appropiate images and poetry, was much apppreciated.

Friday 5th March at 3.00pm: The Service for the World Day of Prayer was held in the Gordon Memorial Hall on the theme of ‘Let everything that has breath praise God’ which had been planned by Christian women in Cameroon, West Africa. There was good representation from local churches at the service and it was felt to have been a joyful and meaningful occasion.

Sunday 7th February 2010 in the afternoon, Magic Monty entertained the Sunday School children and their parents. 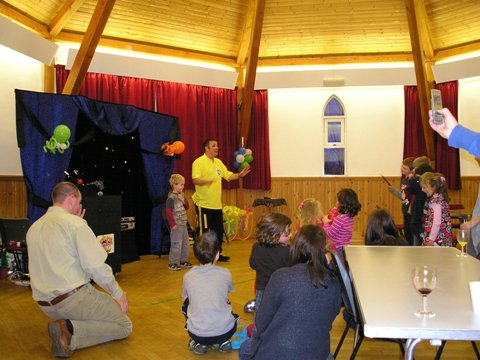 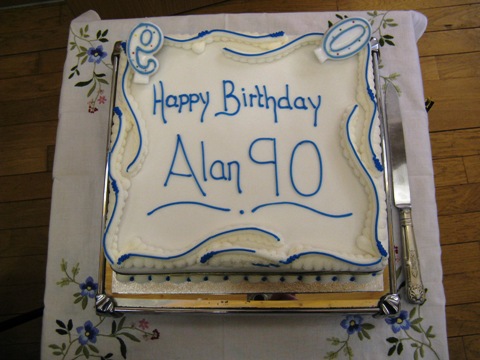 Today, following our morning service at which he preached the sermon, Lay Reader Alan Stewart gave a delicious lunch in the Hall for the congregation to help him celebrate his ninetieth birthday, and a very happy occasion it was. 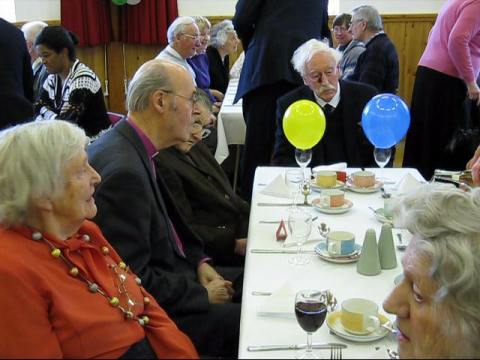 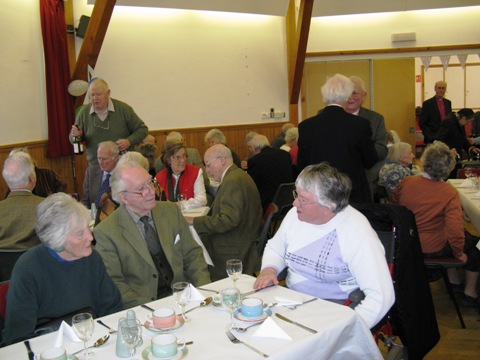 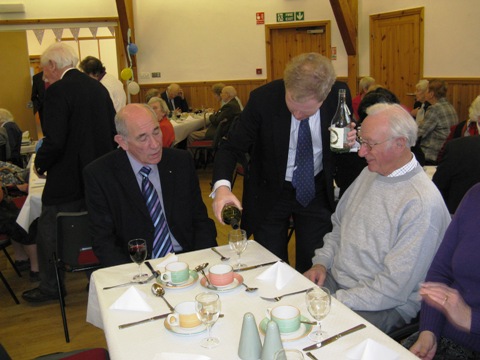 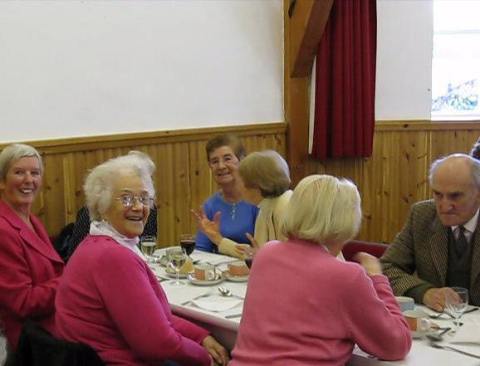 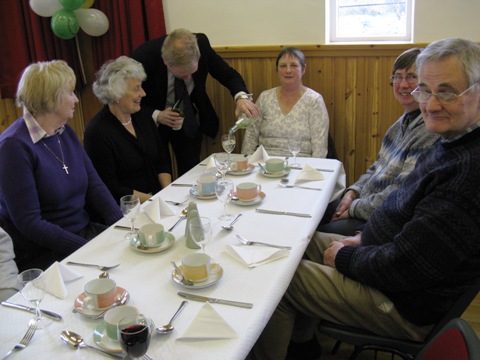